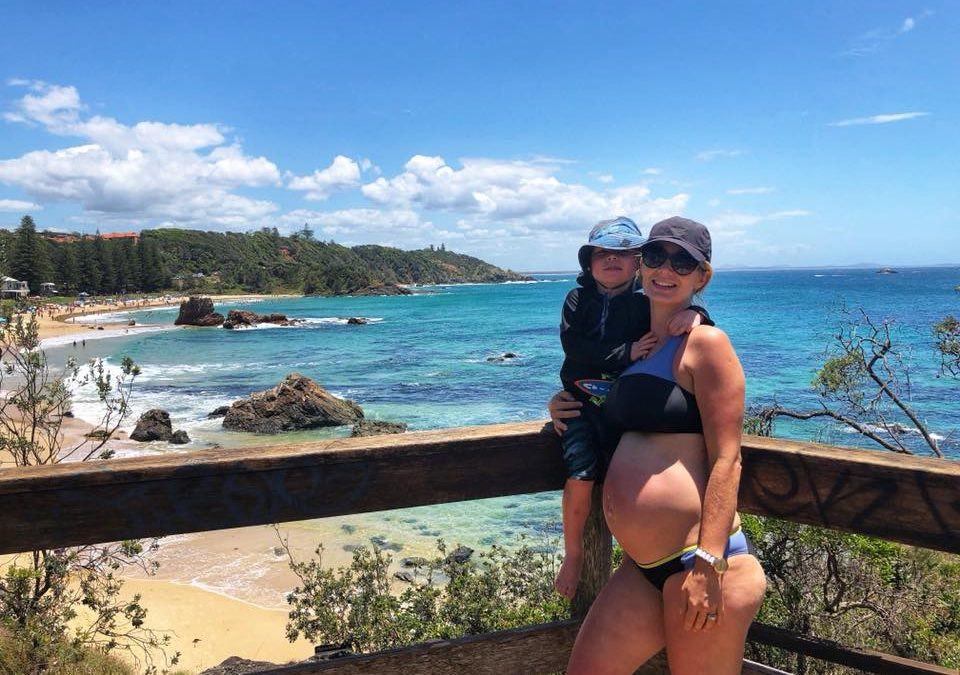 OMG, what a difference energy-wise between first and second trimester (I can’t remember feeling this different during my first pregnancy). This energy definitely helped me to keep up with my training. I trained four to five times a week. Strength training twice a week and cardio two to three times a week. My cardio was a mix of spin classes, swimming, and walking (just a quick 30 minutes). During my pregnancy, I gave up spinning classes, I think in my second trimester, as I didn’t feel comfortable with my belly in the way, but this time round I actually really enjoy it (especially that I do quick 30-minute sessions).

During this trimester, I kept lifting challenging weights. However, I made sure I always have awareness in my pelvic floor. And the weight was much lighter at the end of the second trimester compared to what it was at the beginning of my second trimester. I always began my strength sessions with diaphragm breathing and glute work. It’s really important to keep your glutes strong during the pregnancy. Strong glutes will help with your posture and can prevent you from hip and back pain.

I went to see my physio at about 22 weeks and found out that my pelvic floor is not as strong as it was at the beginning of my pregnancy (my prolapse was still the same though) so I was prescribed to do more Kegels (not my favorite task I will admit). To make it easier on myself I started associating some of my daily activities with Kegels. For instance, I would always do them in the shower (that way this just becomes a habit. I didn’t really have to think about it much after a while, and I know this will also stay in my head post-birth) and in bed, just before I went to sleep.

Luckily in the second trimester my nutrition has improved. I wasn’t hungry all the time anymore and my nausea stopped. I still liked my, treats, though and fruit. I think I’ve never eaten so much fruit as during this pregnancy. I’ve been obsessed with mangos (luckily they are in season).

I have to admit I would have a treat on most days. So to make it healthier I started baking more snacks like oat bars, coconut slices, etc. (which were great for my toddler, too, plus were very easy to make).

In this trimester I got better with the proteins but still was a bit funny with mincemeat; it didn’t taste the same as before I got pregnant (during my first pregnancy I went off chicken).

As I’ve mentioned before, I had much more energy, which was great. The energy levels started to drop at the end of second trimester, though, but that probably was more due to not sleeping that well at night. I had to go to the toilet more often plus the baby was moving, and it wasn’t always easy to go back to sleep. I was waking up much earlier as well (often around five a.m.).

The great thing about the second trimester is that you start feeling baby moving and then seeing the movements as well. They say that often you feel them earlier in your second pregnancy, but I think that in my case, it was more or less the same. The thing is, during your first pregnancy you have time to lie down and look/wait for the movement, but with the second pregnancy there is not as much down time so you might not even notice these gentle movements.

My mood swings were all over the place, especially at the beginning of my second trimester (not so much at the end). I could cry or get angry very easily. And my baby brain was also terrible; I even forgot to put some of my son’s Christmas presents under the tree, lol.

I didn’t really have many prolapse symptoms during this trimester. But I also got fitted with a ring pessary just in case, more for my mental peace, especially during training, than anything else. Before I got pregnant I used a cube pessary (which I have to admit I prefer much better), but it’s not advised to use the cube while you are pregnant.

In terms of body image, I have to admit this trimester has been quite challenging for me, even more than during my first pregnancy. I struggled with losing my muscles and getting cellulite. It was hard to look at my workout videos, which I recorded at the beginning of my pregnancy, and see my toned arms and legs and then look in the mirror and see these muscles gone. I know I can get it back, but I worked hard for them and I know it will be hard work to build the muscle again. Even harder than first time round, as I will have to also fit in looking after two, not just one kid this time. My bum changed shape as well (and got much more cellulite) even though I kept focusing on working my glutes during this pregnancy (that’s all my treats 😉 ). Also my boobs got massive (I had to buy a maternity bra very early), uncomfortably massive. During the second trimester, this time round my boobs were the same size as with my first one just after birth when they got that first milk (I don’t even want to think how big they are going to get this time round). I actually couldn’t even find a bikini top I could comfortably wear on the beach, so I had to opt in for a sport top instead. And yes, I know these changes are totally normal while you are pregnant. But the changes are happening so quickly that it’s not that easy to accept them. I didn’t feel like that during my first pregnancy though. Maybe that’s because I was pregnant during the winter so I didn’t show as much skin, and these changes weren’t as easy to notice under layers of clothes. But I try not to obsess about my body as I know that I can’t do anything about it for another few months anyway (I can stop all my snacking, though, lol). I’m trying to focus on the growing baby inside my belly and being grateful for this journey.